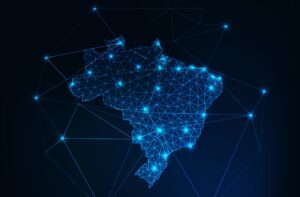 USCIB joined with the U.S. Chamber’s U.S.-Brazil Business Council and Brazil’s National Industrial Confederation (CNI) to co-host an important seminar on Brazil’s accession to the OECD.

The seminar on March 18 on Digital Issues in Brazil’s OECD accession featured speakers from the Brazilian and U.S. governments, digital trade experts from the OECD Secretariat and the Business at OECD (BIAC) coalition, in which both CNI and USCIB are actively involved, as well as private sector representatives.

The virtual session, the second in an on-going series on various critical policy issues in Brazil’s OECD candidacy, drew over seventy-five participants from Brazil, the U.S., and beyond.

“We has an excellent introductory discussion of a wide range of digital issues, including privacy, Artificial Intelligence (AI), data localization, and intellectual property protections,” said USCIB Senior Advisor Shaun Donnelly, who co-chaired the session. “Clearly both the Brazilian government and our friends at CNI and across the Brazilian private sector are enthusiastic about the possibility of Brazil becoming a candidate to join the OECD. That OECD accession process is never an easy one; OECD standards are high. But because it is an important partner for the U.S. and for our member companies, we continue to play an active and constructive role in this process, both in various BIAC expert committees in Paris and in efforts like today’s seminar with our members and partners like CNI and the U.S. and Brazilian Governments.”

As members of USCIB’s Policy Team, Policy and Program Assistants work to support the mission of the organization on an array of issues ranging from Growth, Jobs and Open Market; Competitiveness and Innovation; Sustainable Development; and Business and Society.