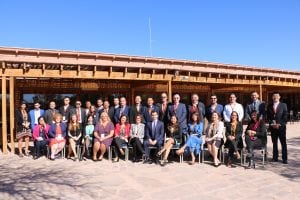 Giblin participated in a panel with Chilean and Chinese Customs as well as World Customs Organization (WCO) representatives addressing the challenges and gaps on implementation of the APEC Customs Transit Guidelines. Overall the event was well attended and included participants from several APEC economies, including Chile, China, Indonesia, Mexico, Peru and Vietnam, as well as a handful of domestic Chilean industry representatives.

“USCIB participation in this event was critical in providing industry inputs into the process and is consistent with our longstanding engagement and leadership on customs and trade facilitation matters within APEC,” said Giblin. “The dialogue resulted in a positive discussion and general consensus on the ‘guidelines.’ These ‘guidelines’ are now viewed as ‘guiding principles’ and next steps among all parties, as well as secured a path forward for this issue as Chile takes on the APEC presidency in 2019.”