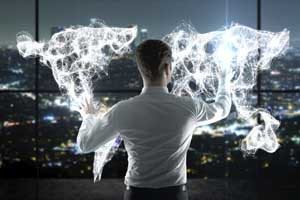 Science fiction is rife with farfetched stories about robots plotting to conquer the world – the physicist Steven Hawkings even recently suggested humans should colonize other planets in case robots surpass people – but fears of artificial intelligence displacing human labor in the workplace are much more realistic.

As part of the USCIB Foundation’s ongoing research of human capital requirements in the 21st century, the foundation published a report with the McGraw Hill Global Institute and the Center for Curriculum Redesign (CCR), titled “Hype vs. Reality: A Roundtable Discussion on the Impact of Technology and Artificial Intelligence on Employment,” which concludes that our educational system must change if we are to take advantage of the new jobs technology will create.

Published on October 21 and based on a roundtable held earlier this year in New York, the report is available for download on the USCIB Foundation website.

CCR Director Charles Fadal observed that the educational systems of the United States and many other advanced economies were designed with the needs of a 19th century, largely industrial workforce in mind. In order to address the needs of a more technologically advanced workplace, the older curriculums would need to give way to new systems that foster greater creativity, critical thinking and collaboration.

It is likely that as the pace of technological innovation increases, more jobs will be completed more quickly and efficiently by machines. But as the report notes, “it is just as likely that truly creative intelligence tasks, social intelligence tasks, and those mechanical tasks involving sophisticated perception and manipulation will still require – at the very least – human oversight, if not substantial human involvement.” The report adds, “just as it has in the past, technology will eliminate some jobs for human beings while creating the conditions for the emergence of others.”

But in order to equip the workforce with the knowledge and skills needed for a new labor landscape in which robots perform jobs traditionally done by humans, today’s education curriculum must undergo a major redesign. Above all, the report notes that the educational system must teach students to be adaptable, “precisely because we cannot predict what technologies will be ascendant in the future, we have to teach ourselves and our children to be versatile.”

More on the USCIB Foundation

This entry was posted in Business In Society, Latest from USCIB and tagged Corporate Responsibility and Labor Affairs.
Posted on December 4, 2014