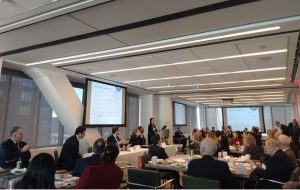 USCIB held its annual Arbitration Committee Luncheon in New York on January 22, bringing together local arbitration professionals for an update on new initiatives and goals for 2020, as well as a look back on 2019 accomplishments by the International Chamber of Commerce (ICC) International Court of Arbitration©.

According to Thevenin, Mourre emphasized on the positive perception of the ICC’s new policies by businesses, noting that ICC is perceived as an open, transparent and dynamic institution and as a well-known quality decision maker in part due to its serious scrutiny process. Serra presented the statistics showing that 2019 was the second-best year in newly-registered arbitration and discussed the ICC’s new tendency to act as amicus curiae in cases that impact international arbitration practice. Krasula provided insight into trends in U.S. cases during the past year and expected developments in the coming year. Van Lith presented the role of the ICC Commission on Arbitration and ADR, its previous task forces, and current task forces on addressing issues of corruption in international arbitration as well as on ADR and arbitration.