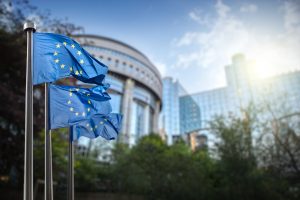 The European Union concluded a public consultation last month on a proposed Carbon Border Adjustment Mechanism (CBAM), part of the EU’s ambitious Green Deal, focusing on deep cuts in greenhouse gas emissions. USCIB submitted its members’ response on October 28, drawing on the expertise of its Committees on Customs, Environment, Taxation as well as Trade and Investment.

“The EU CBAM proposal is complex, seeking to “level the playing field” by imposing extra costs on imports from countries with different climate change policies” said USCIB Vice President for Environment, Energy and Strategic International Engagement Norine Kennedy. “In our comments, we addressed climate change, trade and technical aspects of the proposal which we believe to be most relevant to American companies doing business with, and in, the EU.”

One critical recommendation was on timing; USCIB encouraged the EU to undertake thorough consultative and data-based economic and trade impact assessments, especially with regards to developing countries, to avoid unintended and counter-productive consequences on livelihoods. “As countries continue to experience the fall out and economic disruption of the COVID-19 pandemic, we believe governments should proceed cautiously before adding stresses to the global trading system,” warned Eva Hampl, USCIB senior director for trade, investment and financial services.

USCIB also stressed the importance of ensuring compatibility with World Trade Organization (WTO) rules, warning that some elements of the EU CBAM proposal are unclear, which may lead to time-consuming disputes and delay the positive potential for deployment of innovative technologies and materials vital to climate change action, as well as hinder economic growth and recovery.

Hampl added: “Any further development of this currently counter-productive proposal must avoid and head off climate disputes at the WTO that may lead to unpredictable or unintended negative outcomes in environment, climate and trade negotiations.”

On technical practicality and administrative burdens, USCIB’s recommendation included reducing those burdens and the associated costs of compliance, which would inevitably subtract from resources available for other areas of environmental improvement.

USCIB believes that synergies between trade and environment protection should be the focus of international cooperation, and unilateral measures should be discouraged.

“Open trade advances economic prosperity and the UN Sustainable Development Goals (SDGs), and it is an essential vehicle to achieve widespread and rapid deployment of climate-related investments and cleaner and more efficient technologies and forms of energy,” emphasized Kennedy. “To meet the commitments and objectives of the SDGs, the United Nations Framework Convention on Climate Change (UNFCCC) and the Paris Agreement, it is clear that more trade will be needed.”