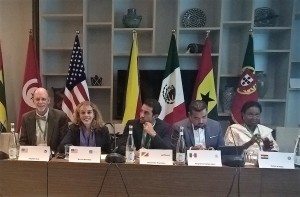 USCIB joined representatives from over forty leading national and international business groups to endorse the Marrakesh Declaration, agreed at the High Level Business Summit on November 16 during the 22nd UN Convention on Climate Change (COP22) meetings in Marrakesh.  This meeting, convened by Morocco’s preeminent business group, the Confederation General des Enterprises de Maroc (CGEM) and the leading French business organization, MEDEF, agreed a consensus statement on business priorities and commitment to further develop the Paris Agreement and to create enabling frameworks to support business investment, innovation and implementation of the UN climate agreement.

The main objective of COP22 was to accelerate technical work and guidelines for reporting under the Paris Agreement in several areas, including tracking government action and linking carbon markets, in order to support implementation and meet deadlines resulting from the rapid ratification and entry into force of the Paris Agreement.  While few substantive issues were resolved, the two weeks of negotiations did deliver decisions to outline a timetable for future work and request submissions from governments on a wide range of policy and market topics. Over 20,000 government, UN, NGO, business and press representatives attended COP22.  Members of USCIB on hand at the conference included Nick Campbell, Arkema, Justin Perrettson, Novozymes, Russel Mills, Dow Chemical Company, Brian Lowry, Monsanto, Arthur Lee, Chevron and Jorge Dieguez, Dupont.

While the outcome of the U.S. presidential election did raise questions regarding the U.S. role in the UN Framework Convention on Climate Change, according to Norine Kennedy, USCIB’s vice president for energy and environment, “We regard U.S. government involvement in the UN climate process as critical to represent and defend U.S. economic interests overseas, and promote U.S. innovation as part of the solution to energy security and lower carbon economic activity.”

USCIB also presented on business perspectives on implementing the Paris Agreement and the role of business in developing and improving national pledges, known as Nationally determined contributions (NDCs), that are the foundation of the Paris Agreement.  At an official COP22 side-event on November 18, organized by the Major Economies Business Forum (BizMEF), of which USCIB is a founding member, Kennedy participated on a panel with other experts and representatives from the U.S. Chamber of Commerce, the Turkish business association, TUSIAD, the Austrian Federal Economic Chamber, The Confederation of Swedish Enterprise, Japan’s business group Keidanren, and the Global CCS Institute.

USCIB actively works with BizMEF to develop global business recommendations on the top-line issues that matter to U.S. business. Just one week prior to the official COP22 side-event, USCIB, through BizMEF, partnered with CGEM to convene the 4th BizMEF Business Dialogue. This Dialogue brought together over seventy participants from business, governments, and UN agencies and was a crucial platform for Kennedy to present USCIB’s report on the role of business in developing national pledges under the Paris Agreement, with recommendations for involving the private sector in national and international assessments of climate action.

The next two years will bring multiple fast-moving – by UN standards – decision-making deliberations across a number of key issues, and USCIB will continue to track those that most directly impact our members. USCIB will focus on ways to carve out a clear role for business input and representation in the process. Kennedy emphasized, “We consider it fundamental, at both the national and international levels, for policy makers to consult with business on the economic and environmental aspects of climate policies. There is no doubt that the Paris Agreement has implications for every business sector, across all types of commercial activity, in the near and the long terms. So preserving and improving the UN system’s accountability and transparency, and creating new opportunities for the private sector to contribute, this is USCIB’s bottom line.”

USCIB will circulate a comprehensive COP22 report out and seek USCIB members’ recommendations on 2017 USCIB climate advocacy in early December.  Please contact Norine Kennedy to get involved in USCIB’s climate and environment committees.

CLICK to download new BizMEF statements on the role of business in the UN climate talks, implementing the Paris Agreement, national reporting and verification and greenhouse gas markets.