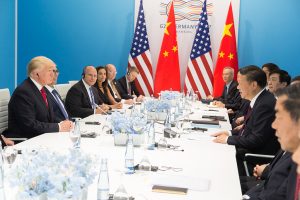 USCIB joined Americans for Free Trade, a multi-industry coalition consisting of over 150 members, to send a letter to President Donald Trump on April 22 regarding upcoming U.S.-China trade talks.

The Coalition letter urged the U.S. government to fully and immediately remove all recently imposed tariffs, including U.S. tariffs and China’s retaliatory tariffs as part of a final deal, while also encouraging the U.S. to come up with a deal that levels the playing field for U.S. companies by achieving meaningful changes to address China’s unfair trade practices that put American technology, innovation and intellectual property at risk.

Regarding unfair trade practices, the letter stated: “For too long, China has engaged in unfair trading practices, including forced technology transfer, cyber theft, intellectual property violations and more. We hope any final deal will resolve the structural issues that are at the core of the trade dispute in order to fully protect American technology, innovation, and intellectual property.”

The letter also urged the government to avoid any enforcement mechanism that would trigger further tariffs and obtain clarity on how the tariff exemption process will be carried out in the event of a deal.

Finally, the group also urged an economic assessment by the Administration examining the costs of tariffs for American businesses and consumers.

Americans for Free Trade represents companies that employ tens of millions of American workers and provide goods and services to virtually every corner of the United States.