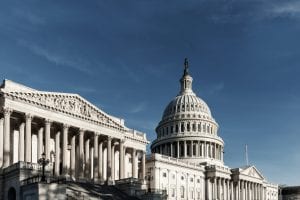 USCIB joined the effort of the USMCA Coalition in its most recent Congressional Lobby Days just ahead of August recess, which reached more than 100 House offices. USCIB Senior Director for Trade, Investment and Financial Services Eva Hampl joined a group which met exclusively with House Democratic offices July 24-25. According to Hampl, representatives noted that they understood the importance of USMCA for the economic future of the U.S.

The Coalition referenced the July 23 letter signed by over 600 business associations across the country in pushing for urgent Congressional approval of USMCA.

There was a keen interest in the USMCA working group of House Democrats, which was established last month by House Speaker Nancy Pelosi to address some Democrats’ lingering concerns about issues in the agreement, specifically on labor, environment, enforcement and pharmaceutical pricing. While there were varying views on the substance of those discussions, there was general approval of the process. Many are looking to Pelosi for next steps. U.S. Trade Representative Robert Lighthizer and his team continue to meet with members of the working group. Discussions have been described as productive, and the Coalition has urged all parties to continue this important work during the August recess. The Senate remains in session this week.

“The Coalition is emphasizing the urgent need for action to move the agreement through Congress,” said Hampl. Hampl also noted that approval will depend on a collaborative approach.

The Senate Finance Committee is holding a hearing on USMCA today (July 30) and is featuring auto industry, agribusiness, transportation, dairy, and small business representatives, as well as a witness focusing on labor policy. For a list of witnesses please click here.