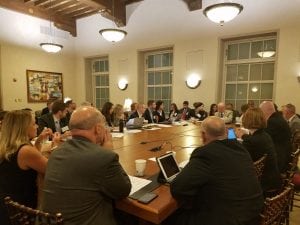 USCIB and the U.S. Chamber partnered on an industry day with the U.S. Government inter-agency group on the World Customs Organization (WCO) Cross-Border e-Commerce Framework of Standards (FoS) on June 14 in Washington DC, in preparation for upcoming WCO e-Commerce Working Group meetings, as well as WCO Policy Commission and Council meetings that will take place over the next few weeks in Brussels, Belgium. The event included robust representation from the U.S. government, more than 10 agencies, including Department of Homeland Security, Customs and Border Protection, Departments of Commerce and State, the Federal Trade Commission and the National Security Council.

The meeting provided a unique opportunity for industry to express views into the U.S. government position development process on cross-border e-commerce at the WCO. There have been several versions of a draft Cross-Border e-Commerce FoS since early 2018. Several WCO Members have raised concerns with aspects of the draft FoS (e.g., content, scope, transparency, and pace of the process). As a result, at the April WCO meetings, the e-Commerce Working Group convened and made significant changes to the draft FoS. In June, the WCO Policy Commission and Council will consider the 15 standards of the WCO e-Commerce FoS, respective introductions, and Resolution as well as a request for extension to Working Group. This week, the U.S. delegation is participating in e-Commerce Working Group meetings, where they will advance its positions on the definitions, data elements, and Technical Specifications.

“Following this productive exchange, we look forward to continuing our partnership on this matter and look forward to future, productive, engagement with the interagency group,” said USCIB Director for Customs and Trade Facilitation Megan Giblin.