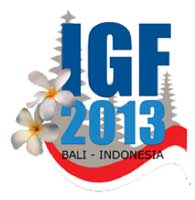 USCIB co-organized two workshops at the 8th Internet Governance Forum (IGF), which took place October 21-25 in Bali, Indonesia, enabling USCIB members and other stakeholder groups to make important substantive contributions on Internet governance, mobile telephony and use of the cloud in emerging economies, and the economic engine of digital trade.

At the IGF, some 2,000 participants from business, government, civil society and the technical community participated in nearly 250 workshops aimed at exploring such varied topics as the principles of Internet governance and the multi-stakeholder model of governance, the Internet as an engine for growth and sustainable development, and human rights, freedom of expression, and free flow of information on the Internet.

On October 22, Jacquelyn Ruff (Verizon Communications), moderated a standing-room-only workshop on “Mobile & Cloud Computing in Emerging Economies.” It featured commentary from speakers representing a broad cross-section of regional and stakeholder interests, including Verena Weber (OECD), Rohan Samarajiva (LIRNEasia) and João Barros (University of Porto, Portugal). The session focused on the developmental promise for emerging economies from mobile telephony and cloud computing capabilities due to their enormous potential in the next five years, when 90 percent of the world population is expected to have access to mobile coverage.

The following day, Richard Beaird (Wiley Rein) moderated another well-attended discussion on “Global Trade, Local Rules, & Internet Governance.” It featured commentary by Joseph Alhadeff (Oracle), vice chair of USCIB’s Information, Communications and Technology Committee, as well as Ruff, Samarajiva, and Sam Paltridge (OECD). The panel focused on the importance of supporting internet-enabled economic growth and how the erection of trade and regulatory barriers can impede such developmental benefits.

According to Barbara Wanner, USCIB’s vice president for information, communications and technology policy, the controversy surrounding revelations of unauthorized surveillance by the U.S. National Security Agency informed much of the commentary of the IGF, particularly in light of new reports of NSA surveillance of countries such as France and Germany. She said that, in the wake of the NSA revelations, Brazil’s recent proposal to host a meeting in May 2014 to consider new ways of Internet governance dominated formal program discussion at the IGF as well as informal “hallway” consultations.

In an October 24 meeting with members of the International Chamber of Commerce’s BASIS (Business Action to Support the Information Society) initiative, which includes USCIB, Brazilian officials said that the conference would include all stakeholders. A goal they would like to see is the development of a set of new principles for governance of cyberspace.

Details concerning the Brazilian initiative changed and evolved throughout the IGF week – and likely will continue to evolve in the coming weeks. ICC-BASIS, USCIB, and other business participants are still assessing what the May conference will mean and how to shape its development. Click here to read more about ICC’s presence in Bali on the ICC website.

This entry was posted in Competitiveness and Innovation, News Stories and tagged Information Communications and Technology.
Posted on October 25, 2013