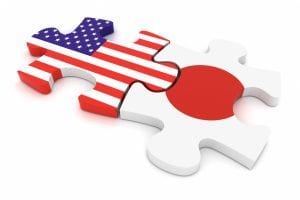 Japan is currently the fourth largest goods trading partner of the U.S.

Japan is currently the fourth largest goods trading partner of the U.S. and in 2017, Japan was the United States’ fourth largest export market as well. U.S. goods and services trade with Japan totaled an estimated $283.6 billion in 2017, with exports totaling $114 billion. The U.S. also has a surplus in services trade with Japan, totaling $13.4 billion.

“A successful trade agreement with Japan should cover not just market access for goods, but also address important services issues, as well as issues like digital trade and intellectual property,” said USCIB Senior Director for Investment, Trade and Financial Services Eva Hampl. “We look forward to working with the Administration toward a favorable outcome for U.S. business in a U.S.-Japan FTA.”

USCIB welcomed the conclusion of the Trans-Pacific Partnership Agreement (TPP) back in October 2015, noting at the time that a comprehensive, market-opening agreement would provide a significant boost to the United States.  The Administration has released negotiating objectives for a U.S.-Japan FTA, negotiations for which may begin as soon as late January.