Central to the modern economy, chemicals and products they are used in are traded widely across borders. Because they add value to so many different consumer goods, chemicals are a staple economic building block for the member countries of the Asia Pacific Economic Cooperation (APEC) forum.

Participants at these meetings agreed to work on the following items: 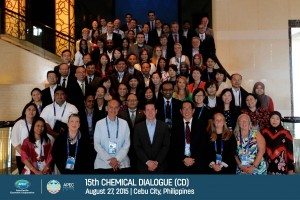 At the APEC Chemical Dialogue, USCIB also brought to the table two new ideas to help bolster regulatory cooperation and streamline customs procedures in the APEC region: 1) a self-certification customs form, in which an importer of goods would self-certify that their imports comply, and 2) a regional capacity-building project related to the theme of  “Analogue/Read-across use in Risk Assessment.”

This entry was posted in Business In Society, News Stories and tagged APEC, Product Policy.
Modified on February 22, 2017
Posted on August 21, 2015