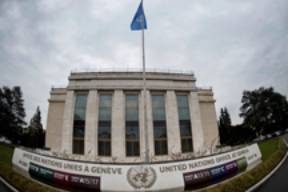 The United Nations Forum on Business and Human rights was larger than ever this year, drawing over 2,000 registered participants. USCIB attended the forum, which took place from December 1 to 3 in Geneva along with representatives from USCIB’s global network, including the International Chamber of Commerce (ICC) and the International Organization of Employers (IOE).

USCIB co-organized and co-hosted a business-only side event along with the ICC and IOE and several other global business associations on December 1 with close to 100 business representatives, during which business views were garnered on progress and challenges relating to corporate respect for human rights. Overall business attendance at the event was up from previous years and was estimated to be between 10-20 percent of all attendees.

Attendees agreed that the Forum’s atmosphere improved over previous years and was very conducive to constructive dialogue between the stakeholders. The quality of the dialogue was no doubt influenced by the chair of the Forum, Sudanese businessman Mo Ibrahim, who bucked traditional UN protocol in favor of a more collegial and engaging atmosphere, referring to participants as “brothers and sisters,” rather than relying on the traditional honorifics.

A primary area of interest to business and other stakeholders was governments’ progress in creating National Action Plans (NAPs) to implement the UN Guiding Principles on Business and Human Rights. Countries that have submitted NAPs thus far include the UK, the Netherlands, Italy, Denmark and Spain, while the United States, Colombia, Finland and Switzerland are in the process of developing theirs. The IOE has prepared a synopsis of the completed NAPs.

USCIB will co-host an open consultation about the U.S. NAP along with NYU Stern Center for Business and Human Rights on December 15, which will engage representatives from the United States government on their plans for the U.S. NAP.

Another focus of the discussions was on the question of access to remedy, ranging from the current practices of companies to provide non-judicial, operational grievance mechanisms, and emerging legislative efforts by governments to influence the conduct of their companies operating extraterritorially.

Ariel Meyerstein, USCIB’s vice president for labor affairs, corporate responsibility and governance, spoke at a panel on “Identifying options for international coordination and regulation to overcome challenges in access to remedy,” which involved NGOs as well as a Dutch national prosecutor and a former Canadian Supreme Court justice. The dialogue explored the wide array of existing legal frameworks for addressing issues like corruption as well as the deficiencies in these approaches, which rely on prosecutors and courts from different countries to support one another with legal assistance and sharing of information.

Another aspect of access to remedy that featured prominently at the Forum was the intergovernmental working group to be established in 2015 to explore the creation of a binding international instrument on transnational corporations and human rights. This initiative, spearheaded by Ecuador, was the focus of an IOE side event during the forum, in which IOE Secretary General Brent Wilton called on business to show results with respect to human rights to pre-empt other actors from giving their own take and detracting from the momentum behind the UN Guiding Principles on Business and Human Rights, which the business community actively supports.

“We have to continue to proactively and constructively promote the implementation of the UN Guiding Principles,” said Wilton, reminding participants that existing mechanisms to address human rights should not be undermined.

This entry was posted in Business In Society, Latest from USCIB and tagged Corporate Responsibility and Labor Affairs.
Posted on December 3, 2014