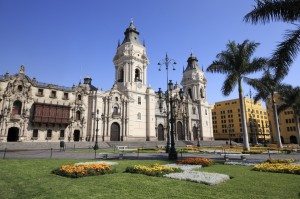 USCIB staff attended the Asia-Pacific Economic Cooperation (APEC) Senior Officials Meetings (SOM) in Lima, Peru last week, to coordinate business engagement on a variety of issues including customs, chemicals in products, and information and communication technologies (ICT). Comprised of 21 Asia-Pacific economies that account for 40 percent of the world’s population, 50 percent of global GDP and half the world’s trade, the APEC forum is the region’s top economic dialogue dedicated to encouraging economic growth, regional cooperation and trade and investment. The Asia-Pacific region is of great interest to USCIB members, as global companies are eager to tap the region’s growing markets.

USCIB’s Director of Customs and Trade Facilitation Megan M. Giblin participated in meetings of the Global Supply Chain Integrity Workshop, APEC Alliance for Supply Chain Connectivity (A2C2), and attended the APEC Subcommittee on Customs Procedures meetings through her role as Industry Co-Chair of the SCCP – Customs Virtual Working Group. USCIB member priorities were front and center at all the meetings attended, including the World Trade Organization Trade Facilitation Agreement (TFA), single window, customs reform, and other key topics such as e-commerce from a customs perspective and de minimis.

Giblin reported that the TFA and its implementation are on the minds of all APEC member economies. TFA implementation was the focus at most meetings. With respect to where APEC economies stand on TFA ratification, only 13 of the 21 APEC economies have ratified the agreement. 108 WTO members must ratify it before the agreement – which is estimated to reduce worldwide trade costs by up to 17 percent – can enter into force. Giblin leveraged her time with government delegations to promote TFA ratification, entry into force, and robust implementation of the commitments, and to simultaneously assess where the governments are in the ratification process.

Further, Giblin, assisted in a USAID-led presentation on the Global Alliance for Trade Facilitation, a new public private partnership tied to implementation of the TFA. In Giblin’s role representing USCIB as “ICC USA,” she spoke to the engagement with ICC Paris on the alliance, the structure and composition of the secretariat, broader alliance network, and aided in fielding questions from the delegates. She looks forward to continued communication and engagement on Alliance matters with ICC, but also with USCIB member companies in efforts to engage them directly in support of the alliance. For more information, please contact Giblin at mgiblin@uscib.org

USCIB’s Vice President for ICT Policy Barbara Wanner participated in the APEC Electronic Commerce Steering Group’s Data Privacy Subgroup meetings from February 23 to 25 in Lima. The meeting’s highlights included a stock-take of the 11-year-old APEC Privacy Framework, exploration of efforts to expand participation in the Cross-Border Privacy Rules (CBPR) system in the both APEC and non-APEC economies, and the launch of a new effort to develop a communications strategy to more effectively explain the benefits of the CBPR system.

These meetings came on the heels of recent negotiations between the United States and the European Union on a new data protection framework, the EU-US Privacy Shield, and USICB members took the opportunity to underscore the importance of APEC’s CBPR as a solid, accountable, and enforceable privacy code of conduct for cross-border data transfers and the need to more effectively communicate to all stakeholders its potential for enabling global interoperability. For more information, please contact Wanner at bwanner@uscib.org

The APEC Chemical Dialogue convenes government officials and industry representatives for discussions about how to best regulate the chemicals trade in a way that protects the environment while minimizing costs to business. USCIB’s Vice President for Product Policy and Innovation Helen Medina attended the Chemical Dialogue and closely followed plans to revise the dialogue’s goals, which currently are: to facilitate trade by expanding and supporting cooperation and mutual recognition among chemical regulators in the region, to enhance understanding of the chemical industry’s role as an innovative solutions industry and to encourage chemical product stewardship, safe use and sustainability.

Highlights from the Chemical Dialogue include considering new work on sustainable chemistry, a self-certification form for chemical imports, and future workshops related to GHS and sharing of best practices in chemicals regulation. For more information, please contact Medina at hmedina@uscib.org

This entry was posted in Growth, Jobs and Open Markets, News Stories and tagged APEC.
Modified on May 18, 2021
Posted on February 29, 2016