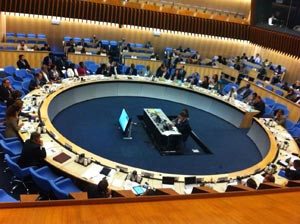 To reach that goal, the Second International Nutrition Conference (ICN2) will take place this November, and in the lead-up to the conference the FAO and the World Health Organization (WHO) have organized an Open Ended Working Group on September 22-23, hosted at the WHO in Geneva, to approve the final drafts of the ICN2 Political Declaration and a Framework for Action, documents that are meant to provide key priorities to governments and other stakeholders for improving people’s nutrition in a sustainable way.

Helen Medina, USCIB’s senior director for product policy and innovation is currently attending the working group, along with other non-state actor representatives and Member State delegations. USCIB was among two U.S.-based associations representing American business interests at the working group. The meeting marked the first time USCIB has been invited to attend a negotiating session at the WHO.

Last month, USCIB submitted comments to the FAO consultation on the framework identifying several problems with the draft’s language, particularly clauses that either ignored or downplayed industry’s contributions to alleviating malnutrition. As USCIB’s comments were taken into consideration, Medina is attending the working group negotiations to ensure that stakeholders acknowledge that the private sector plays a positive role in addressing nutritional issues.

“We want to make sure that the discussion acknowledges that the private sector is part of the solution,” Medina said.

USCIB maintains that increased trade in agriculture and food increases the standard of living in developing countries and improves the performance of national economies. Given the positive role industry plays in combating malnutrition, it is important that the FAO’s framework support policies that do not inhibit international trade and investment.

During the working group meeting, USCIB working with other private sector representatives will have the opportunity to engage with U.S. and foreign government officials to further the following messages:

The political outcome document and the framework for action are supposed to be finalized during the working group meeting with the view of being adopted at ICN2 in November.

This entry was posted in Competitiveness and Innovation, Latest from USCIB, Sustainable Development and tagged Food and Agriculture, Product Policy.
Modified on February 22, 2017
Posted on September 22, 2014