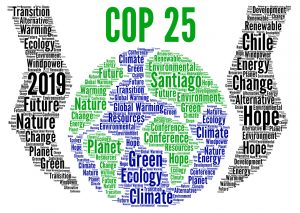 The 25th United Nations Framework Convention on Climate Change (UNFCCC) Conference of the Parties (COP) is in the home stretch, as Ministers meet in Madrid to seek political compromise on carbon markets and offsets, as well as to set the stage for pledges of deeper cuts in greenhouse gas (GHG) emissions.

According to USCIB Vice President for Strategic International Engagement, Energy and Environment Norine Kennedy, who is reporting from the field, a fundamental goal of COP25 is to complete unfinished business from the previous year, specifically as it relates to the Paris Agreement and its provisions for carbon markets and offsets, often referred to as “Article 6”.

“Avoiding double-counting crediting for carbon sinks and determining whether a percentage of the value of carbon trade transactions will be allocated to developing countries are two unresolved issues for the business community here at COP25,” said Kennedy. She also noted that the validity of the Kyoto Protocol’s carbon “currency” to the new Paris Agreement carbon regime is also under development.

An additional imperative is the need for deeper and faster cuts in GHG emissions that are required to limit temperature rise to 1.5 degrees, and to get on track to a proposed 2050 net-carbon neutrality objective.

Additional issues yet to be resolved, but are closely being monitored by USCIB, are common timeframes to be covered by voluntary national GHG reduction pledges, known as NDCs, financial support to developing countries for GHG reductions and technology cooperation, as well as how to treat compensation for loss and damage from climate change-related impacts.

The International Chamber of Commerce (ICC) serves as focal point for business, convening daily business briefings to share intelligence and organizing the UNFCCC Business Day, which took place on December 6.

The two-week COP began on December 2, and will run through December 13, under the Presidency of Chile. COP25 was moved to Madrid, Spain following civil unrest in Chile.