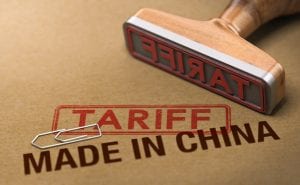 USCIB supported a Tariffs Hurt the Heartland coalition statement, responding to President Trump‘s announcement to impose a ten percent tariff on an additional $300 billion in Chinese goods. Tariffs Hurt the Heartland is a nationwide campaign against tariffs supported by over 150 of America’s largest trade organizations representing retail, tech, manufacturing and agriculture.

The statement noted: “The administration is doubling down on a failing strategy. Nobody wins in a trade war, and raising tariffs further on American businesses and consumers will only result in slower economic growth, more farm bankruptcies, fewer jobs and higher prices. These new tariffs will target the products American families buy every day, ranging from shoes and apparel to toys and electronics.”

The statement also emphasized that “it’s time for the administration to come up with a real strategy, put a stop to harmful tariffs and finally deliver the trade deal Americans were promised.”

USCIB had previously supported the coalition during a Fly-In campaign against tariffs, combining the efforts of Farmers for Free Trade and Americans for Free Trade, of which USCIB is a member, and also did a submission and testimony on the 300 billion dollars on tariffs.