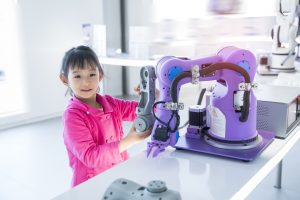 In celebration of the five years since the United Nations formally recognized the need to increase gender equality in the sciences to support implementation of the Sustainable Development Goals (SDGs), the Royal Academy of Sciences International Trust (RASIT), with co-sponsorship from USCIB and the International Chamber of Commerce (ICC), hosted the 5th International Day of Women and Girls in Science Assembly from February 11-12 at the UN headquarters in New York.

The event drew widespread support and interest from countries such as Hungary, Zambia, Montenegro, St. Kitts and Nevis and Portugal, as well as UN agencies, including the UN Conference on Trade and Development (UNCTAD), the World Intellectual Property Organization (WIPO) and the International Telecommunications Union (ITU). Academics, UN officials, ambassadors, royalty, young scientists and business representatives, including USCIB Assistant Policy and Program Manager Daniella Goncalves, joined the event to discuss the forum’s theme of driving investment in equality in science, technology and innovation in the digitalization era for inclusive green growth.

According to Goncalves, several young women, as young as eleven, made inspiring interventions, detailing their efforts to bring about equity through robotics and coding applications, use of emerging technology in agriculture and irrigation, medicine and more.

“Together, the accounts illustrated a pressing need for movement in the gender pay gap, skilling and access to research, while simultaneously displaying the work of the next generation of female scientists and technologists in solving these issues,” said Goncalves.

Daniella Goncalves is Assistant Policy and Program Manager, based in USCIB’s New York office. Goncalves supports USCIB Vice President for Corporate Responsibility and Labor Affairs Gabriella Rigg Herzog across the Corporate Responsibility & Labor Affairs policy portfolio. Goncalves is a recent graduate of Columbia University where she received her degree in Human Rights from the School of General Studies, and has worked in several roles with a focus on public policy or public interest. She has experience in the private sector, having worked most recently with Verisk, where she did reviews of state regulatory developments in the financial and insurance fields.
Read More