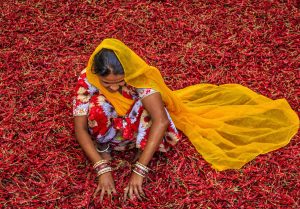 With the UN High-Level Political Forum taking place in New York from July 10-19, USCIB has been on the ground, starting with Agriculture and Food Day, an event hosted by the International Agri-food Network (IAFN) on July 13, which summarized the importance of targeting the agricultural sector and food issues in order to reach the Sustainable Development Goals (SDGs) by 2030.

The SDGs help to guide people and the planet towards a sustainable future, and they were created to measure progress and achievements towards this series of 17 goals adopted by the UN General Assembly under the moniker Agenda 2030.  During the High-Level Political Forum, the UN Secretariat works with its member states to discuss paths to implementation and to track progress on the SDGs.  IAFN has advocated for several years during the SDG development process on the need for a stand-alone goal on sustainable agriculture and food security; this goal is SDG2, Ending Hunger.

However, “solutions cannot address just one goal, but must look to make a difference to several at once,” noted Mike Michener, USCIB’s vice president for product policy and innovation who also covers USCIB’s work on health and food and agriculture. “The purpose of Agriculture and Food Day was to examine how focusing on agricultural and food policy could achieve not only Goal 2 but also make substantive contributions to the achievement of the other 16 goals.  Investments made in agriculture — the dominant occupation for the world’s poorest people — can accomplish much beyond Goal 2, including improvements in health, incomes, trade, infrastructure, and the environment,” he said.

IAFN partnered with a number of leading organizations to host “Agriculture and Food Day” to celebrate, discuss, negotiate, analyze, and brainstorm around the role of the agricultural and food sector in relation to the implementation of the SDGs. The day included a thematically-focused plenary session with high-level speakers including high-ranking UN diplomats, a series of roundtable discussions on inter-linkages in SDGs, and a dynamic luncheon featuring of youth in agriculture with the goal to raise awareness of the critical need for investment in Goal 2, Zero Hunger. IAFN hosted the event with the Farming First coalition, a group that advocates for agriculture programs to be farmer-centered and knowledge-based.

USCIB is also participating in the SDG Business Forum on July 18.