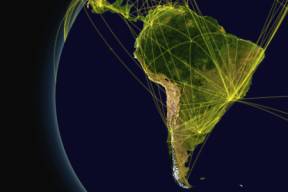 The global trade environment is changing rapidly, with the emergence of new global trade architecture, the uncertain fate of the WTO’s trade facilitation agreement, and increasing opposition to investment protections in trade agreements such as the Trans-Atlantic Trade and Investment Treaty (TTIP).

On October 20, the Integration and Trade Sector of the Inter-American Development Bank (IDB) hosted a forum on “The 21st Century Trade Architecture: Implications for Latin America and the Caribbean” for a discussion about the most pressing trade policy challenges, with an emphasis on Latin American economies.

Rob Mulligan, USCIB’s senior vice president for policy and government affairs, participated in a panel on “Trends in Trade and Integration: Trading against Headwinds,” in which he spoke about global value chains (GVCs), where companies move intermediate goods between countries in producing a final product, and of the benefits to be gained from the participation of Latin American economies in GVCs.

The panel was moderated by Gary Hufbauer, senior fellow at the Peterson Institute for International Economics, and Mulligan was joined by John Melle, Assistant U.S. Trade Representative for the Western Hemisphere; Ken Ash, director of trade and agriculture at the Organization for Economic Cooperation and Development; Abdel-Hamid Mamdouh director of trade in services at the World Trade Organization and Sally Yearwood, executive director of the Caribbean-Central American Action.

In his remarks, Mulligan stressed the importance of using GVCs to remain competitive, innovate, and stay close to customers. He cited an OECD study that found that one-third of most countries’ imports is part of their exports, and noted that in order to remain competitive in GVCs companies require access to efficient imports of goods and services. Latin American economies have much to gain from participating in global value chains, and government policies can impact the extent of that participation.

Mulligan also discussed the factors that companies consider when they’re deciding whether to invest in a country along a global value chain. Such factors include infrastructure, workforce development, a fair and transparent tax system and effective rule of law. He noted that certain policies inhibit companies’ ability to operate through GVCs, such as forced localization, restrictions on cross-border data flows and restrictive customs rules and regulations.

Trade agreements are an effective way to pursue policies that facilitate that movement of goods and services within GVCs, and Mulligan explained that business prefers multilateral trade agreements and also supports regional agreements such as TTIP and the Trans-Pacific Partnership (TPP).

In order to take advantage of GVCs, Mulligan concluded by noting that Latin American governments could take unilateral steps to improve infrastructure and education, and eliminate localization rules and date flow restrictions. These countries could also benefit from regional trade integration.

This entry was posted in Growth, Jobs and Open Markets, Latest from USCIB and tagged Trade and Investment.
Posted on October 23, 2014