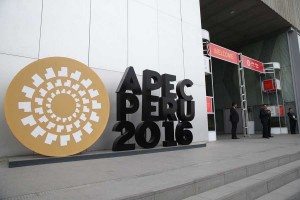 This week, USCIB President and CEO Peter M. Robinson will attend the Asia-Pacific Economic Cooperation (APEC) CEO Summit in Lima, Peru, as a business delegate and representative of the U.S. APEC Business Coalition. Attending with him will be Helen Medina, USCIB’s vice president of product policy and innovation.

Organized under the leadership of the National Center for APEC (NCAPEC) USCIB will be joining other Coalition and NCAPEC members on the ground, including CEOs and executives from USCIB member companies. NCAPEC serves as the designated 2016 U.S. Strategic Partner for the CEO Summit, Secretariat to the U.S. members of the APEC Business Advisory Council (ABAC) and as Chair and Secretariat of the U.S. APEC Business Coalition.

“APEC actively supports economic growth, regional cooperation, and trade and investment,” said Robinson. “USCIB welcomes the committed partnerships that APEC, as the top economic forum in the region, has sustained with the private sector to address the complex economic issues that face the region. It is a vital platform for addressing trade and investment, which is especially important now that prospects for U.S. ratification of the Trans-Pacific Partnership look cloudy.”

Throughout 2016, USCIB has addressed a number of issues through APEC to advance discussions across a range of issue. These include chemicals regulation, advertising self-regulation, data privacy, customs, digital trade, and women in the economy. Our members and staff have engaged in several APEC working groups, including the Chemical Dialogue, APEC Business-Customs Dialogue, Customs Procedures Virtual Working Group, Alliance for Supply Chain Connectivity, the Electronic Commerce Steering Group and Data Privacy Subgroup.

In Lima, Robinson and Medina will meet with USCIB members, leaders from APEC economies and representatives of intergovernmental organizations to discuss member companies’ APEC priorities and USCIB’s work. They look forward to hearing from USCIB members in Lima, in addition to joining with Coalition partners, to advance common objectives.

The upcoming APEC meetings in Lima include, in addition to the CEO Summit, the Concluding Senior Officials’ Meeting, Fourth APEC Business Advisory Council (ABAC) Meeting, APEC Ministerial Meeting and APEC Economic Leaders’ Meeting. As these meetings draw Peru’s host year to a close, USCIB has begun to gather priority issues from its membership for 2017, when Vietnam will serve as APEC’s host. We are continuing to collect input, and will shortly release our APEC Priority Issues and Recommendations for 2017.

Michael Michener is USCIB’s vice president of product policy and innovation, joining USCIB in early 2017. Michener is a former administrator of the U.S. Foreign Agricultural Service who has also served as a U.S. trade diplomat and association executive. Michener most recently served in Brussels as director of multilateral relations for CropLife International, representing the association before a range of international organizations – including the UN Food and Agricultural Organization, the UN Environment Program and the UN Framework Convention on Climate Change – on issues related to crop protection products and agriculture biotechnology.
Read More