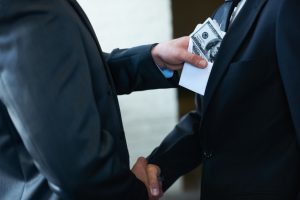 USCIB has joined with other major U.S. business associations as well as the AFL-CIO labor federation and the Coalition for Integrity, a leading anti-corruption NGO, to send a joint letter to President Trump requesting that the Administration take major steps this year to combat international bribery and corruption.

The group recommends a particular focus on the G20, the largest economies and major competitors and partners, with a view to getting those G20 members which are not yet signatories to the OECD Anti-Bribery Convention become signatories and full partners to that convention by the end of 2018.  China, India, Saudi Arabia, and Indonesia are key G20 members falling into that category.

“Our letter also recommends that the Administration should step up its efforts to ensure vigorous and consistent enforcement of foreign bribery laws as well as its OECD convention obligations by all G20 member nations,” said USCIB Vice President for Investment and Financial Services Shaun Donnelly. “International bribery is not only morally wrong, it is also an attack on the U.S. economy, our companies and workers following the highest standards of integrity. When foreign competitors use bribery and corruption to win business away from American companies and workers, that is a direct hit at our economy and is unacceptable. We look forward to working with our partners in this initiative and key U.S. Government agencies in the lead-up to the G20 senior meetings later this year to advance the battle against international bribery and corruption.”