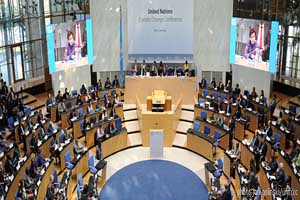 Ahead of a planned global climate agreement in Paris next year, government negotiators have assembled in Bonn, Germany from June 4 to 14 for the next round of UN climate talks. These June sessions of the United Nations Framework Convention on Climate Change (UNFCCC) focused on “raising ambition in areas of urbanization and land use.”

Negotiators have been tasked with designing the 2015 agreement and finding ways to raise ambition to address climate change before 2020.

“We want to work with you so we can achieve a deal that involves all countries, motivates all actors, and delivers economic and environmental benefits to all,” Kennedy told government officials at the meeting.

She stressed that governments will benefit from listening to what business considers priority elements that should be reflected in the 2015 climate agreement. Kennedy noted that the agreement should work with markets on issues such as carbon pricing, and she urged governments to build flexibility into the treaty so that states can adjust to future scientific, technological and economic innovations. Due to limited resources, Kennedy said the final agreement should promote cost-effective, market-based actions.

“The UNFCCC’s attention to non-state actors, such as business, has opened a promising area of cooperation and further work to supplement and amplify government efforts,” Kennedy noted.

Kennedy reports that the talks on a new UN post-2020 agreement have reached the halfway point, after meetings on June 8 concluded with an impasse.  While governments have committed to agree to “elements of a text” at the next Conference of Parties in December in Lima, they cannot reach any consensus on their starting point text for discussion.  The new agreement will include sections on mitigation (greenhouse gas reduction commitments), adaptation to climate change impacts, technology and finance for developing countries, transparency and reporting, and “nationally determined contributions (NDCs).”

NDCs are a U.S. proposal backed by most countries to allow each country, whether developed or developing, to set out its pledges for action.  This is a departure from the previous Kyoto Protocol approach, which was built on “top-down” targets.  Business representatives in Bonn are seeking to better understand where the private sector would weigh in during the national and international stages of this pledge and review oriented approach.

The first half of the week was dedicated to ministerial discussions and a full-court charm offensive by the incoming president of the UNFCCC negotiations, the Peruvian Environment Minister, Manuel Pulgar Vidal.   Preparations for the Lima COP have gotten off to a slow start, with construction of the conference venue delayed.  This raises the possibility that the number of government and non-governmental representatives allowed to attend will be quite limited.  Lima is expected to indicate whether governments can agree on the form of targets and funding commitments and thereby to be on track to reach the final agreement in Paris in 2015.

USCIB has met with members of the Inter-Governmental Panel on Climate Change (IPCC) and with the “Umbrella Group” (a coalition of countries including the U.S., Canada, Norway, Israel, New Zealand, Australia, Japan, Russia) to discuss information needs from business for the NDCs, the future of carbon markets and the Clean Development Mechanism, and the role of business in the new climate treaty to be finalized in Paris. USCIB is working with the Major Economies Business Forum (BizMEF) and the International Chamber of Commerce (ICC) which serves as the official business focal point for the UNFCCC.

“So at the half-way point, the process is facing some major hurdles,” said Kennedy. “However, delegations are feeling the pressure of expectations on them to reach an outcome in Paris that will pass muster with domestic stakeholders, so failure is not an option.”

This entry was posted in Business In Society, Latest from USCIB, Sustainable Development and tagged Environment.
Modified on January 21, 2015
Posted on June 6, 2014