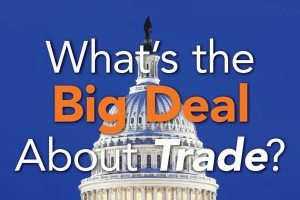 The 2016 presidential race has brought trade under heavy fire, with both candidates opposing the the Trans-Pacific Partnership. Jonathan Huneke, USCIB vice president of communications and public affairs was quoted in an article by the American International Automobile Dealers Association about current misconceptions about trade.

Jonathan Huneke, the vice president of Communications at the U.S. Council for International Business, echoes that belief, noting that many Americans believe the economic climate is working against them. “Despite steady growth in jobs since 2010, wage stagnation in the United States has led many in the United States to believe that the odds in the current economy are stacked against them,” he notes.

According to Huneke, “American dealers have a lot at stake in keeping our trade policy fundamentally open and forward-leaning. There is huge demand and growth potential for innovative automobiles that meet the needs of U.S. consumers. Many of the most innovative automakers rely heavily on the American market, and on skilled American workers, to compete globally.”

Huneke agrees. “Trade agreements serve important diplomatic and geopolitical purposes in addition to their economic benefits, something that most Americans probably understand,” he says. “For example, the TPP and TTIP agreements can play an important role at a time when we are seeking to strengthen our Asian and European alliances in the face of threats like North Korea and ISIS.”

This entry was posted in Growth, Jobs and Open Markets, Media Coverage, Trans-Pacific Partnership. Bookmark the permalink.
Posted on August 11, 2016