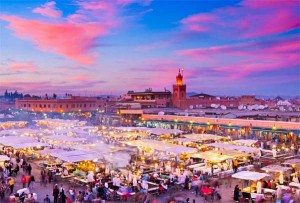 Leading business organizations met in Marrakesh, Morocco on the margins of the UN’S COP22 climate meetings, to address the next steps under the Paris Climate Agreement, specifically the prospects for injecting business expertise and technical advice into the agreement’s implementation at the national and global levels. Convened by USCIB, in cooperation with the Major Economies Business Forum (BizMEF) and the Moroccan business federation CGEM, the Marrakesh Business Dialogue brought together over 70 government, business and UN representatives at the Universite Privé de Marrakesh.

“The Paris Agreement’s entry into force earlier this month increases the urgency to engage business in all aspects of the Paris Agreement, including its implementation,” according to USCIB Vice President Norine Kennedy, who is spearheading USCIB’s representation in Marrakesh.

Opening the meeting, Said Mouline, the Moroccan official responsible for public-private partnerships for COP22, stated that “business engagement is needed for capacity building and technology transfer.” In the course of the dialogue, participants talked about defining entry points in the Paris Agreement for representative business organizations that would contribute to transparency in reporting, reviewing national progress and informing future national pledges.

Business and government representatives agreed that both have a lot to gain from working together on the NDCs, improving transparency and measurement, verification and verification (MRV) systems, and seeking to maintain continuity and resilience of the pledges made. This cooperation will need to long term and ongoing, through the five-year cycles that are at the heart of the infrastructure of the Paris Agreement.

USCIB’s Kennedy presented a recently completed report, Business Engagement in Domestic and International Implementation of the Paris Agreement. This first-of-its-kind report offers case studies from BizMEF partner organizations and recommends a recognized business interface to be developed as part of the Paris Agreement institutional infrastructure.

“USCIB’s consistent message has been that enhancing business engagement is not just a matter of innovative governance and partnership, but also a prerequisite for successful and cost-effective implementation of climate policy,” stated Kennedy. She said such engagement should build on existing entities such as the Green Climate Fund, the Technology Executive Committee, and the Climate Technology Center and Network, and should work in synergy with the Global Action Agenda and NAZCA Platform. “The structure can be similar to other existing successful examples of business consultation and dialogue in inter-governmental forums,” such as the OECD and the Strategic Approach to International Chemicals Management, she said.

Kennedy added: “It is the business community that will do much of the implementation that is needed to reach the goals under the Paris Agreement, and USCIB has set enhancing recognized business consultation as a priority in its post-Paris climate advocacy.”

Kennedy stated that it is only with broader, more substantive and inclusive business engagement that the Paris Agreement can meet its potential. “This is more than a “nice-to-have,” she said. “It is essential to further the evolution at needed speed and scale to a lower carbon and sustainable global economy.”

BizMEF, of which USCIB is a founding member, is a partnership of leading multi-sectoral business organizations from over 25 major economies that provides responsible business views and practical input to inform deliberations in the United Nations Framework Convention on Climate Change (UNFCCC).