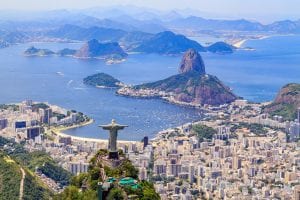 The Congress focused on four main initiatives, including a sustainable future for all, skills for the future, financial inclusion and the World Chambers Competition. “This year’s event was a huge step forward in engaging the chambers network more actively and cohesively in ICC’s global work – with great buy-in for our five campaigns and a growing interest in how ICC can help chambers redefine their value proposition in a market that is undergoing significant disruption,” reflected ICC Secretary General John Denton.

Denton also highlighted a new initiative as part of ICC’s campaign to “Make Climate Action Everyone’s Business.” The “Chambers Climate Coalition” provides a platform for chambers to visibly demonstrate their commitment to take action aligned with the Paris Agreement and the latest climate science. It also provides an opportunity to showcase the important role Chambers can play in driving the transition to a cleaner and more resilient planet. More than 450 chambers from six continents have already signed-up for the Coalition – with signatories from countries including China, India, South Africa, Nigeria and the United States.

“We are already rallying other chambers to sign on and will be providing toolkits to signatories to ensure effective local climate engagement in the coming months,” said Denton. The Coalition has received strong support from the United Nations Secretary General’s team and the UN Framework Convention on Climate Change.

The next Congress will be held in Dubai in 2021.

Declan Daly joined USCIB in August 2018 as Senior Vice President and CFO. Daly also serves in a COO capacity, overseeing ATA Carnet and Trade Services and IT. Prior to USCIB, Daly was with CSI Sports, an international multimedia company operating in over 40 countries, where he was VP of Finance and Operations. Prior to that, he was CFO of Geptek/GTI, which consists of a Trading Group and an Environmental Service Group, serving various industries through a network of domestic and global suppliers, partners and service providers. Other positions included Director of Finance for the FW Dodge division of McGraw-Hill and Director of Finance and Business Manager for Simon & Schuster.
Read More