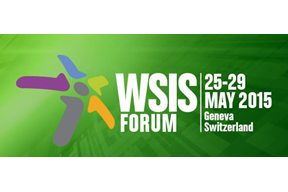 During the 2015 World Summit on the Information Society (WSIS) Forum in Geneva, convened under the auspices of the United Nations, governments underscored the importance of information and communication technologies (ICTs) as engines for economic growth and as crucial elements of the post-2015 UN Sustainable Development Goals, reports Barbara Wanner, USCIB’s vice president for ICT policy.

Further enriching the forum’s discussions, USCIB member companies such as Intel, Microsoft, Oracle, Verizon, The Walt Disney Company, and Wiley Rein made important contributions to both plenary sessions and workshops on topics as diverse as privacy and security, child online and digital citizenship, empowering women to innovate, and innovation in accessibility technologies.

Government officials, business leaders and members of civil society and the technical community assembled in Geneva from May 25 to 29 for the WSIS stock-taking meetings to review a decade-long progress on promoting the use of Information and Communications Technologies (ICTs) as engines of economic and social development. The forum was hosted by the UN’s International Telecommunications Union (ITU), together with co-organizers UNESCO, UNCTAD and UNDP.

A recurring theme in speakers’ remarks throughout the week was the importance of broadening awareness about the indispensable role played by ICTs in realizing the post-2015 SDGs.

“ICTs are cited in only four of the 17 sustainable development goals,” ITU Secretary General Houlin Zhao noted in launching a special high-level session on May 26, suggesting that this is not a proper reflection of their developmental potential. “ICTs are a catalyst and enabler in development; they support capacity building efforts in areas as diverse as health, gender equality and sustainable farming,” Zhao said.

“This year’s forum, which marks the tenth anniversary of WSIS, was especially important because the UN General Assembly will evaluate its progress and decide its future at a special High-Level Meeting that likely will be held during the week of December 14,” said Wanner. “Virtually all speakers therefore sought to highlight the developmental value of the WSIS process.”

Other themes included the importance of business investment as an impetus for developing new technologies, the need for all stakeholders to be involved Internet governance, renewing the mandate of the Internet Governance Forum as a neutral space for exchanging best practices and capacity-building expertise, and the use of ICTs to empower youth and achieve gender equality.

Addressing a high-level dialogue on gender empowerment, USCIB Member Cheryl Miller (Verizon) described digital gender empowerment as “a community issue, not just a man’s or a woman’s issue.” Miller also shared the success of Verizon’s “Tech Girls” initiative, which brings to the United States young women from Africa and the Middle East to learn coding as well as shadow senior executives at Verizon.

Speaking on the same panel, Paul Mitchell (Microsoft) elaborated on various initiatives Microsoft has undertaken to close the digital gender gap. Digi Girls, for example, teaches High School-aged girls how to do podcasts, create web pages, and so forth. Microsoft recognizes that increasing women in technology and computing has the potential to greatly improve the design of products and services, he said.

On the subject of leveraging ICTs to empower youth, Ellen Blackler (The Walt Disney Company) explored Disney’s investment in entertainment products designed to develop critical thinking skills that the younger generation will need for future success as a productive contributors to the digital economy. Disney recognizes that the Internet “is essential to everything going forward [so that] the biggest risk is that kids will not have the [requisite] digital skills,” she said.

Business plays a central role in harnessing ICTs for economic and social development. USCIB’s ICT Policy Committee Vice Chair Joseph Alhadeff (Oracle), who delivered a policy statement on behalf of ICC-BASIS, highlighted how business investment has served as an important impetus for economic growth and development of technologies benefitting society. For this reason, we must have a policy environment that enables emerging economies to tap the developmental potential of emerging technologies such as cloud computing, Big Data, and the Internet of Things, he urged.

This entry was posted in Competitiveness and Innovation, News Stories and tagged Information Communications and Technology.
Modified on June 18, 2015
Posted on May 29, 2015