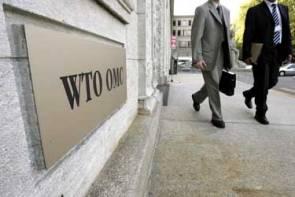 President Trump’s Administration has recently released a congressionally mandated annual report on the U.S. trade agenda, which re-examines the U.S.’s relationship with multilateral organizations and, in particular, targets the World Trade Organization (WTO). The report asserts that the U.S. has a right not to abide by WTO decisions that are not favorable to the U.S. trade agenda.

USCIB supports numerous elements of the report, specifically those regarding an open and fair global trading system, eliminating trade barriers, enabling U.S. companies to compete on a level playing field around the world and effectively enforcing trade rules. But it urged caution regarding the WTO.

USCIB President and CEO Peter M. Robinson stated: “We encourage the new administration to engage with the WTO in addressing areas for improvement in the operation of the WTO. But it’s important to recognize that the American economy, our companies, and our workers benefit from U.S. participation in the WTO, including through such agreements as the WTO Information Technology Agreement, and will reap important benefits from the WTO Trade Facilitation Agreement that just entered into force last week.”

Senior administration officials concurred. “The WTO is in some ways very necessary,” Commerce Secretary Wilbur Ross said on CNBC. “You probably do need an arbiter of some sort if you’re going to have international trade.”

As reported by CNBC, Ross, who said he will be largely focusing on trade issues, added the administration will also be cracking down on enforcement of existing trade laws and making sure that countervailing and anti-dumping duties established in trade remedy cases are being collected. Part of the trade agenda will be facilitating U.S. exports to international markets, but the flip side is “preventing illegally subsidized goods from coming in — and really enforcing it,” Ross said.

The full interview with Ross is available on CNBC is here.